Belly dance is natural to a woman’s bone and muscle structure. The movements center on the torso rather than the legs and feet, as is common in Western dance. The belly dancer isolates parts of her body, to move each independently in a completely feminine interpretation of the music. The music seems to emanate from her body, as sometimes she emphasizes the rhythm, sometimes the melody of the song. – Suzy Evans of the International Academy of Middle Eastern Dance

The term “belly dance” is a translation of the French term “danse du ventre”, which was applied to the dance in the Victorian era, and probably originally referred to the Arabic tribe Ouled Nail dancers of Algeria, whose dance used more abdominal movements than the dances described today as “belly dance”. It is something of a misnomer, as every part of the body is involved in the dance; the most featured body part is usually the hips. 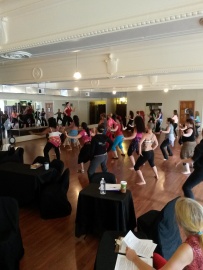 In Arabic, the dance is known as “Raqs Sharqi” (“Eastern Dance”) or “Raqs Beledi” (“Country Dance” or “Folk Dance”).

Belly dance is primarily a torso-driven dance, with an emphasis on articulations of the hips. Unlike many Western dance forms, the focus of the dance is on relaxed, natural isolations of the torso muscles, rather than on movements of the limbs through space. Although some of these isolations appear superficially similar to the isolations used in jazz ballet, they are sometimes driven differently and have a different feeling or emphasis.

In common with most folk dances, there is no universally codified naming scheme for belly dance movements. Some dancers and dance schools have developed their own naming schemes, but none of these is universally recognized.
Janim, one of the founders of Art in Motion PGH has this to say about Bellydance:

WHY BELLYDANCE? That is a question I am asked all the time. It can mean “why of all dance forms, did you choose bellydance?” Sometimes, the question is asked as a means of convincing the questioner that it is worth his or her time to try out a few new lessons.

While I can point to scientific data or health related articles that tout the benefits of the dance, I would rather share with you my own story and happening upon this art form.