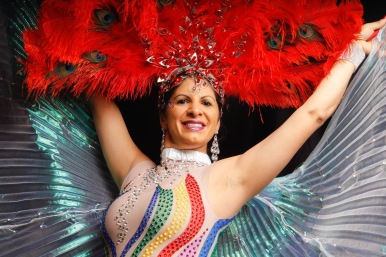 Meet Luciana Brussi, founder of the Pittsburgh Samba Group and AIM PGH Studio Partner: Luciana Brussi was born in Brazil.  She began to study classical ballet at the age of 7 and at 13 she moved on to other dance styles, such as Modern and Jazz.  At the age of 17 she joined the dance professional group in São Paulo where she began to teach children’s dance lessons. At the age of 19,  she began her international career in Europe where she lived for a  year, performing in Brazilian shows in various countries.

In 1998, she arrived in Osaka, Japan.  In the year 2000, she became a choreographer in the cities of Yokohama and Tokyo,  working with various Japanese and international artists and taking part in TV shows and commercials, as well as other important events such as the Asakusa  -Tokyo Samba Carnival until 2010.

Luciana currently lives in Pittsburgh. She performs with her group “Pittsburgh Samba Group”, and teaches samba and other Brazilian rhythms for kids  and adults.

Pittsburgh Samba Group: Luciana Brussi’s “Pittsburgh Samba Group” has been performing frequently throughout the Pittsburgh region since 2012. They perform often at various shows, festivals and private parties. The group performs choreographies but also enjoys dancing freestyle with Timbeleza (Pittsburgh’s high energy Batucada band). They perform all forms of Brazilian dance:  from Samba no pé in feathered headdresses to the more folkloric Carimbo style, Forró and more.  They invite you to feel the samba beat and enjoy dancing along with them!

JANIM, Jen Gallagher, (the Steel City Bellydancer) is a professional performer, instructor, and Director of the Pittsburgh Bellydance Academy.

Janim has dedicated herself to the study of Middle Eastern Dance, its traditions, nuances and deeper meaning and expression through performance, instruction, and continuing education. Her love of the dance can be seen in her dynamic performances and within her thoughtful instruction of her students in both workshops and classes where she presents the fundamentals of bellydance as well as the nuances of zilling and veil work. Join her to discover the love of the dance!

As an experienced, personable, and respected performer and instructor, “Janim infuses classical styles with individual grace and charm, expressing the essential feminine in dance,”- Angele Ellis, Pittsburgh PA. Her understanding of dance movement and technique and her training in Egyptian, Lebanese, and Turkish Oriental styles as well as American Cabaret lends spirit, spontaneity, and heart to her dancing, captivating audiences where ever she performs. To round out her dance education and to infuse a special twist, she currently studies ballet, hip hop, and samba.

Jen is the director and founder of Troupe Faraatha which can be found performing around the city! Jen also organizes events in town. Join her for the annual  Pittsburgh Bellydance Festival! When not performing, organizing, or instructing, Jen is a landscape architect and partner at Studio for Spatial Practice.

Cynthia Jackson is a second generation dancer and performer, growing up the daughter of Betty Love Gibbs. Dance was a natural part of life as her mother was a professional dancer. Cynthia started formal training with her mother at the YWCA Downtown when she created the dance department in 1971. Cynthia is trained in Ballet, Tap, Jazz, Pointe, Baton, International Latin Ballroom Dance and Brazilian Samba, but has a particular passion for Tap dance. Cynthia twirled baton for the Blue Flames Baton & Drum Corps of Monroeville and the Golden Triangle Baton & Drum Corps of Swissvale in the summers through high school. She also twirled baton for Gateway High School Marching Band and was a member of the University of Pittsburgh’s Golden Girls in the Varsity Marching Band.

Cynthia is one of the original members of WAMO’s Hot Tracks Dance Team and was a featured “jitterbugger” in the movie An American Dream: The Making of the Jackson 5.  Performing credits also include Xpressions Dance Company, Art & Style Dance Studio, Kuntu Repertory Theater (Sophisticated Ladies, Bubblin’ Brown Sugar and Jelly’s Last Jam), Greer Reed (Cotton Club), Joy School of Dance, and the Father Ryan Arts Center. Cynthia is currently a performing member of the Pittsburgh Samba Group under the direction of Luciana Brussi Constantino.

Simon Phillips, 24, born and raised in Macon, Georgia, has always had a passion for the arts and sciences. He began formal dance training at age 10, studying tap and jazz. One year later, under his teacher’s guidance, he began training in ballet. Though Simon enjoyed this form of recreation, he was most fond of the West African training that became the bulk of his early dance study. Aside these styles, he also studied modern, lyrical, hip hop, and Latin dance throughout adolescence.

After finishing high school in 2012, Simon attended Kennesaw State University (Kennesaw, GA), where he double majored in psychology and dance. During this time, he grew tremendously in artistic experience. Simon was a member of the KSU Dance Company for all 5 years of undergraduate study. Along with this, he had the opportunity to work with several professional dance choreographers including Lauri Stallings (gloATL), George Staib (Staibdance, Atlanta), Augusto Soledad (Brazzdance, Miami), and Daniel Gwirtzman (Daniel Gwirtzman Dance Company, New York City). He also performed at the John F. Kennedy Center in Washington D.C. before spending a summer in Durham, North Carolina to attend the American Dance Festival at Duke University. Simon’s devotion to training, academic research, and leadership awarded him the title of Who’s Who Among American Colleges &amp; Universities in 2017.

After graduating in 2017, Simon worked as a freelance performer and dance studio instructor in Atlanta until transitioning to Pittsburgh later the same year. He moved to become a full-time company dancer and teaching artist with Attack Theatre, co-directed by Michele de la Reza Peter Kope. Over the past year, Simon has dived into the study of Tai chi, as well as debuted choreographic work, while continuing to perform and teach around the city.

Today, Simon is still driven by his passion in the arts and sciences. His teaching method focuses on development of character through the personal investigation of intent. Simon’s approach to dance encompasses the mind and body into a single expressive system, capable of embodying and communicating abstract ideas. His goal is to inspire people to explore individual thoughts and feelings, and to consider their relationship to the artistic human voice.

Iffie was formally trained in ballet/pointe, tap, and hip-hop during some of her childhood years. Although she was a student-athlete for most of her life, Iffie’s love of dance always shone through. She was a member of her college’s student run dance company, and was the lead choreographer for her basketball team’s yearly talent show performances. She began taking samba lessons at Art in Motion in 2017 after watching the Pittsburgh Samba Group perform in a summer festival. In addition to sharing her love of dance, Iffie also shares her love of sport as a group fitness instructor. She is also a performing member of the Pittsburgh Samba Group under the direction of Luciana Brussi Costantino. 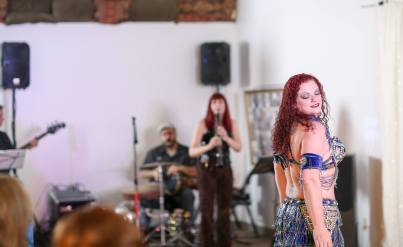 Even though Jeannine primarily dances an American Cabaret style of belly dance, she is also trained in both Egyptian and Improv Tribal Style. She has studied extensively with Janim and Lisa Zahiya.

Jeannine believes that everyone has a reason to dance; personally, she dances for self-empowerment. Her drive for self-empowerment and her passion for dancing illuminates through her crowd interaction. Additionally, as a trained and certified k-12 educator, Jeannine effectively scaffolds material for all students regardless of individual dance backgrounds.

Jeannine is a founding member of Janim’s Troupe Faraatha, which performs at festivals, galas, and fundraising events. In addition to the previously named events types, Jeannine also performs at restaurants as well as various private events. 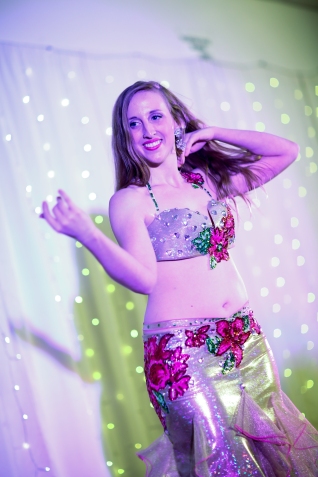 Emily expresses her passion for dance by performing, teaching and continuing her dance education. She has studied intensively with Janim and has also had training from other instructors in the Pittsburgh area. She currently studies and performs Tahitian, American Cabaret belly dance, and other styles of Middle Eastern dance.

Emily is also a member of Troupe Faraatha, who perform classic cabaret belly dance at festivals, fundraisers, and various other events. In addition to these performances, Emily has also performed at restaurants, galas, and other private events. Whether she is learning, teaching, or performing, Emily loves being able to connect with the music and share dance with others.

Carolyn Nicholas started formal training with Diane’s School of dance in 1995. Carolyn is trained in Ballet, Tap, Jazz, Pointe, colorguard, and Brazilian Samba, but has a particular passion for Tap dance. Carolyn was an assistant dance teacher at Diane’s School of Dance for 2 years. Carolyn spun flags, rifles, and Sabre for Fox Chapel Area High School Marching Band, as well as danced in Fox Chapel High school musical productions. Carolyn also enjoys performing. Carolyn was a dancer for the Eriesistable Dance Team and Erie Express Steam Team in college. Carolyn is currently a performing member of the Pittsburgh Samba Group under the direction of Luciana Brussi Constantino and the Steel City Angels.

Tricia Grace is a dance artist who specializes in performance and choreography. Tricia Grace earned a Bachelors of Fine Arts from her combined studies at Slippery Rock University and the University of Hawaii, Manoa. While her studies heavily focused on modern dance, Tricia spent time abroad focusing on Afro Colombian dance technique; she co-directed Slippery Rock University’s Afro Colombian Dance Ensemble during her last year of undergraduate schooling, and continued to work professionally with the company hired on as an assistant director for a year post her graduation. Tricia interned with Now Next Dance in Washington, DC and DanceWarehouse in Brooklyn, NY during her academic studies. She also took on teaching roles as an undergraduate. Tricia developed Slippery Rock High School’s first academic dance course as alternative choice for physical education. Since earning her degree, Tricia has been on the dance faculty for Just Dance by Justine Alberts teaching all techniques and age levels. Tricia also teaches beginner movement studies and practices to Jeanette’s High School Winterguard ensemble. Creative movement is a passion for Tricia; she works on outreach Arts Education programs as a teaching artist for ATTACK Theatre, Pittsburgh. Armstrong Community Theater hired Tricia Grace to choreograph “Kiss Me Kate” a musical production that was presented in the Summer of 2018 at the Casino Theater in Vandergrift, Pa.

Tricia continues to perform in her second season as contracted company member of COURdance, a Pittsburgh based contemporary dance company, under the direction of Kaitlin Flynn Goodwin and is new company member of the Pittsburgh Samba Group. Tricia has performed professional works at the August Wilson Center, Carnegie Museum of Art and History, Union Project Pittsburgh, the National Aviary Pittsburgh and Chicago Emergence Dance Theater. Tricia has opened herself up to other artist and performance opportunities. Tricia trains as a bikini competitor for the NPC body building circuit; she has competed twice at the Carnegie Music Hall and placed 4th both times. Tricia has also booked work with Pittsburgh photographer Richard Frost in which editorial pictures were presented and sold in a Gala in Lancaster, Pa in January of 2019. Tricia Grace is a passionate and driven dancer with hopes of one day beginning her own outreach dance company in the Pittsburgh area.